Use Karate Chops to break up the notes and make woodshedding fun! 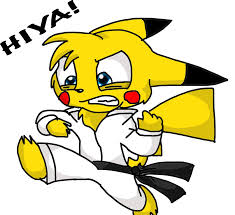 Karate masters break boards and bricks to show their mastery of a skill. Musicians can use music “karate chops” to break tricky passages into smaller pieces. This blog post will give some ideas for how to break music into smaller pieces and use moments of silence to optimize learning.

We will use this passage as an example:

These two measures of music are in a difficult key (four flats=A-flat Major) and have some tricky skips. We are going to break the running notes into smaller pieces. In the first example, we will try two notes at a time, followed by a rest. The rest can be any length. You will find that as your skill improves, the rests will be shorter in length. Play at a tempo that feels just at the edge of control but no faster than you can achieve 95% accuracy.

Once you feel confident playing the exercise in groups of two, try grouping the notes by three. Again, leave as much space between the notes as you need to regroup your fingers and eyes. You are working for accuracy and evenness of notes but don’t worry about playing the rhythm exactly as written. Try for zero mistakes.

In the above exercises, you are giving the brain a chance to process and plan ahead during the rests. There’s something magical about that moment of silence.

Here’s the same example as above but grouping by 2s and starting on the second note of the sequence:

You can get creative with “karate chops.” What would it sound like in groups of 5? Or perhaps start the sequence on the third or fourth note. You should try each version of the karate chops two or three times and then move on to another permutation. Keep your brain entertained and keep mixing it up!

The brain encodes information redundantly. In other words, memories are stored all across the brain. We know that musicians use the entire brain because music involves physical movement, visual cues, auditory input, emotional connection, and more. My blog post Brain Imaging on Musicians references one recent study that shows how the brains of musicians “light up” in a MRI.

When a memory is stored in many places and is used frequently, it will stay in the memory longer and will have faster retrieval. (Research note: The Human Memory article online.)

When we change the groupings of notes or their order, we are strengthening the memory. Even though it seems like changing the music would be harmful to mastery, a study on athletic training found that “a varied practice schedule may facilitate the initial formation of motor schema.” (from a research project by Kerr and Booth, University of Ottawa. ”Specific and Varied Practice of Motor Skill,” Perceptual and Motor Skills, Vol. 46, No. 2, April 1978, 395-401.)

In the book How We Learn, Benedict Carey writes

“The mixing of items, skills, or concepts during practice, over the longer term, seems to help us not only see the distinctions between them but also to achieve a clearer grasp of each one individually. The hardest part is abandoning our primal faith in repetition.” (p. 164)

The silence between groups is unique to this woodshedding exercise, and it is of special importance. Adding rests gives the fingers a chance to pause and achieve greater accuracy. We know that practicing right notes (and not wrong ones) is a path to success. (Blog article Research on Effective Practice Skills.)

For more ideas on woodshedding for musicians, please check out