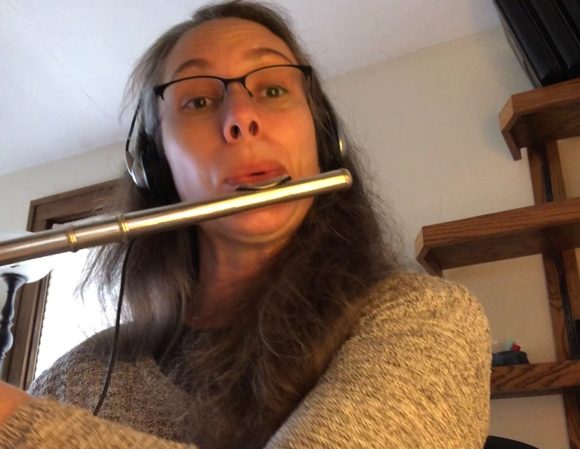 The short answer is: NO, it is not safe to play the flute during the pandemic around other people. (But read on for a more detailed explanation.)

If you read nothing else, re-read the sentence above. Flutists are potentially super-spreaders of the virus.

In this blog post, I will discuss some of the early research that addresses flute players during the pandemic.

The physics of sound production on the flute is complicated. We do, however, know that the flute requires lots of air to be expelled forcefully. Furthermore, flutists must take frequent and deep breaths while playing, which may place them at a higher risk of inhaling aerosols from others.

Is It Safe To Play the Flute Indoors During a Music Rehearsal?

No. Everything that I have read about the spread of the virus by aerosols leads me to the conclusion that flutists are at a heightened risk of spreading and potentially contracting COVID-19.

Is It Safe To Play the Flute Outdoors?

Probably not. The volume and speed of air, as well as the physics of tone production, make mitigation efforts difficult. Even with social distancing, I would still err on the side of caution until we have conclusive scientific proof that it is safe.

Is It Safe To Practice At Home?

YES! You pose no danger to yourself. As long as you do not have other people coming to your house while you are practicing, playing the flute is a healthy way to deal with the stresses of the pandemic. Many of my students report having extra free time and therefore more practice time. Virtual lessons are safe and will help you maintain and grow your skills.

The flute seems like a simple instrument, but the physics behind the tone production is quite complicated.

At the most basic, a stream of air is directed at an edge and split to make a sound. When you blow across the lip plate, your breath contacts the outer edge and is divided into two. One part of the airstream goes into the flute and the other part continues away from the flute at a downward angle.

Different notes are created by changing the length of the tube by opening and closing holes.

In the next video, the flutist takes a white vapor into his lungs then plays the flute. Watch carefully and notice how much air comes out at the lip plate and how much comes out the holes of the flute. Notice also the angle of the air coming out of the player’s mouth.

My experience is that the air is exhaled across the lip plate at approximately a 45-degree angle downward. While there is some air that comes out of the end of the flute and through the tone holes, the highest volume and velocity of air comes from the head joint. People directly in front of the flutist will find themselves in the path of exhaled aerosols.

I did an un-scientific experiment at home with my flute and a candle. At the distance of 3 feet (1 meter), I could blow out a candle when playing a high note on the flute.

The Need For Research Studies

Early in the pandemic, journalists reported about choir rehearsals that became the epicenter of outbreaks. This raised the alarm about the safety of music rehearsals.

COVID-19 is a severe and dangerous disease. Its heart-wrenching infectivity and virulence hit home for many musicians, as we learned of the several choirs which were affected by superspreading events early in the pandemic. One was in Amsterdam, where 102 of 130 participants wound up with coronavirus infection; one in Washington state, where 52 of 60 participants were infected, and at least two others in Europe. Several choir members unfortunately died as a result.

Schwalje and Hoffman, cited below

Across the world, music rehearsals stopped. These super spreader events during choir practice caught the attention of musicians and researchers alike. It was clear that choir rehearsals could be dangerous. But what about wind instruments?

Music educators need scientific data to guide them in making decisions. Early analysis of rushed studies led some music educators to conclude that ensemble playing would be safe for wind players. As of late July 2020, we are beginning to see that this early research was flawed.

The British Columbia Music Educators Association published guidance in June 2020 that referenced four papers, which I will review below. The BCMEA concluded that it was safe to return to instrumental and vocal rehearsals with some safeguards in place during the pandemic. Their guidance was based on early studies that have since been discredited, including the four below.

The Vienna Philharmonic Does Their Own Testing

A statement released in May 2020 by the Vienna Philharmonic suggested that there is no spread of the virus by orchestra musicians. This study was never published in a journal or peer-reviewed. It has come under scrutiny for its methods and conclusions. Furthermore, the Vienna Philharmonic has a financial interest in the return to normal rehearsals and performances.

This announcement by the Vienna Philharmonic got a lot of press and interest at the time it was released. However, the original material seems to have been removed. Notably, the Philharmonic did not return to a “normal” season.

Researchers from the Institute of Fluid Mechanics and Aerodynamics at the University of Bundeswehr Munich released a paper in May 2020 which examined “droplets” from singing and wind playing (video below). They analyzed large droplets, not aerosols, and only did a visual analysis of the videos. No air was sampled for virus particles. They gave general guidelines but suggested that it was safe to resume rehearsals. Nonetheless, one of their conclusions was that “In our opinion, this popscreen is absolutely necessary for a transverse flute in order to allow safe playing at moderate distances.”

On April 25, 2020, Freiburg University released a “risk assessment.” This study has been removed and an update posted. The update still contains problematic information. Consider this section:

“The measurements at the Bamberg Symphony Orchestra show that with regard to the air speed parameter, no air movement could be measured at the sensors, which were placed in the extension of the mouthpiece in 2 meters.”

We know that the air expelled from the flute at the mouthpiece does not come straight out. Sensors placed “in the extension of the mouthpiece” would not detect droplets because that’s not where the air is directed! The lack of a basic understanding of the mechanisms of flute tone production is deeply troubling.

The video created by Nashville Music Scoring attempts to debunk the “myth” that wind instruments spread COVID. It cites the flawed research by the Vienna Philharmonic (above). The Nashville Music Scoring video shows a thin piece of paper suspended from a music stand. It then shows that playing the French horn, whose bell is aimed at the back of the room, doesn’t move the paper. The video has received over 20,000 views despite its dubious claims and methodology. This video has so many flaws I don’t know where to start.

On June 10, Adam T Schwalje MD, DMA, and Henry T Hoffman MD from the University of Iowa, released a paper titled “Wind Musicians’ Risk Assessment in the Time of COVID-19.” They specifically mentioned the flawed research by the Vienna Philharmonic and the original Freiburg University risk assessment paper.

It is vitally important that we stay informed about the pandemic, but we must be critical readers. Although musicians want to return to rehearsals and performances as soon as possible, it is too risky at this time to do so.

With the bad guidance and misinformation that was released early in the pandemic, it’s no surprise that music educators are confused.

The good news is that there are some robust, scientific studies in progress.

My next blog article will look at those in detail.

Until then, you might enjoy reading my other blog posts about the COVID-19 pandemic: