The Rhythm Spinner Game is an excellent tool for woodshedding difficult passages.

Like the Articulation Game, the Rhythm Spinner adds an element of chance to spice up your practicing.

For this game, you will need a hole punch, metal brad, and the chart below with arrow. 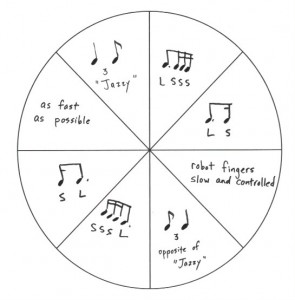 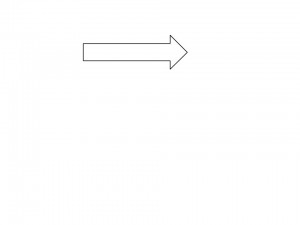 Punch a hole near the end of the arrow. Use a metal brad to connect the arrow to the center of the spinner.

Flick the arrow and play the difficult passage with the rhythm indicated. For instance, if the arrow lands on “Jazzy,” play the passage in a loose, uneven rhythm. (The opposite rhythm is on the other side of the circle.)

Whichever rhythm pattern is selected, play the music at a tempo fast enough to give you a challenge but slow enough that you can play all the notes correctly. When you have tried the first rhythm, spin again.

When the arrow lands on “as fast as possible” play the passage as quickly as possible, letting the fingers run without trying to control them. It may be sloppy or it may be miraculously clean. Simply notice if your finger memory is taking over or if you fingers seem to get “stuck” in one place. Don’t judge yourself and don’t try to make your fingers perfectly fast. Play the passage once or twice this way and then spin again.

When the arrow lands on the opposite side of the spinner – “robot fingers, slow and controlled” – be very deliberate about playing in a relatively slow tempo. You will want to feel each finger going up and down, like typing or hammering.

The other sections of the rhythm wheel show combinations of slow (S) and fast (F) rhythms. It will be naturally easier to begin the pattern with a slow note, but make sure you also practice with the longest note at the end of the four.

When you have tried all the rhythm patterns, go back and play the passage as written. Did it feel easier? Did you make fewer mistakes? Maybe you were able to go a bit faster this time.

Playing the Rhythm Spinner Game takes only a few minutes but it can save hours of time wasted in unproductive practicing.

Teachers, like the Articulation Game, the Rhythm Spinner Game helps randomize practice patterns. You will probably want to introduce the rhythms and model them in a lesson. This game can be modified for other time signatures and rhythms. In addition to helping woodshed a difficult passage, this game is useful in cementing common rhythm patterns. You can also make up your own rhythm patterns.