The Singing Revolution: Another Vision for Activism

The Singing Revolution: Another Vision for Activism

The Singing Revlolution Offers a Model for Nonviolent Protest

The Singing Revolution is the name given to the Estonian uprising that led to freedom from the USSR in 1991. It began in 1987 with a few people joining together to sing Estonian folk songs. Quickly, the movement grew and song festivals attracted thousands of singers, all singing patriotic songs in defiance of Soviet occupation. By singing together, Estonians reclaimed their nation and drowned out the hateful rhetoric of the Russians with song. 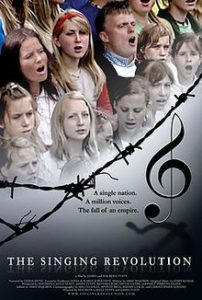 Between 1986 and 1991, while there was violent turmoil and struggle for independence from the Soviet Union in the other Baltic states, Estonians courageously and peacefully demanded that the Soviets recognize their country’s right to statehood and self-governance. The revolutionary songs they created anchored Estonia’s struggle for freedom, which was ultimately accomplished in 1991 without the loss of a single life. The Estonian activist Heinz Valk, who first dubbed Estonia’s resistance the “Singing Revolution”,[5] said proudly of his countrymen, “Until now, revolutions have been filled with destruction, burning, killing, and hate, but we started our revolution with a smile and a song.”[6] Singing fueled the non-violent revolution that defeated a very violent occupation.

From the Wikipedia article on the documentary movie The Singing Revolution

Musical activism has a long history. As I mentioned in a previous post, music and politics are not strangers. We need only sing “Yankee Doodle” to remember the American Revolution or learn “Follow the Drinking Gourd” to share the stories of the Underground Railroad. The song “Which Side Are You On” was a way to spread awareness about the plight of United Mine Workers in Kentucky in the 1930s. And we cannot forget Vietnam protest songs like “Where Have All the Flowers Gone?”

Some of the most enduring examples of musical activism come from the Civil Rights Movement in 1960s America. The legacy of songs like “We Shall Overcome” are still resonant today.

Singing is a way to amplify a message. When voices join together with one message, the sound is louder and stronger. We don’t have to shout if we all sing together. 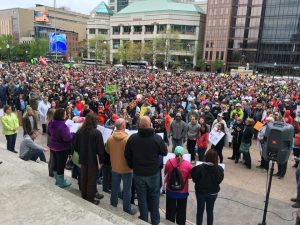 Vocal Resistance at the March for Science

I am proud to be a founding member of the Vocal Resistance Choir. We are promoting justice, peace, and empathy through song. The choir has performed at many events in the Central Ohio area, including the March for Science, March for Truth, flash mobs, Indivisible events, and actions for other progressive causes.

Vocal Resistance believes that the best kind of activism is nonviolent, creative, and energizing. We know that music has a unique power to convey a message directly to the heart.

Inspired by the Singing Revolution, the members of Vocal Resistance are committed to singing rather than shouting. We want the images of our current revolution to be ones of arms linked in solidarity, voices joined in a common message.

What are some of your favorite protest songs, from history and the present day? Why do those songs stick with you? Is music more meaningful than the spoken word? Finally, how can we include more music in the actions of today? Comment below.