Songs have been used to foster patriotism; national anthems, patriotic songs, and campaign jingles arouse the spirit. Anti-government songs are the other side of the political music spectrum: songs to protest war, folk music highlighting social issues, and subversive rock and roll. Even the Greeks understood the power of music to transform government.

“Any musical innovation is full of danger to the whole state, and ought to be prohibited,” Plato warned. “When modes of music change, the fundamental laws of the state always change with them.”

The above Plato quote is taken from Eitan Gavish’s 2009 article in the New York Daily News Music Has Always Been a Tuneful Force For Political Change. In this piece, Gavish interviews singer and political activist Joan Baez, who has been active in protest music for nearly six decades. To maintain that energy over such a long career, it may come as no surprise that Baez talks about her music as a spiritual practice.

More recently, NPR aired a story on John Legend, an outspoken critic of the Trump administration. Many artists, actors, and musicians have been criticized for using their celebrity to speak out about politics. John Legend is unabashed.

Well, we’ve always been liberal. Musicians, actors — it’s almost by disposition. We deal with the gay and lesbian community all the time, so we’re gonna feel like they should have the right to get married just like we do. We deal with people of all colors and all races and we travel to different countries all the time to perform, so we’re going to have a more global view and more inclusive view. It’s almost by nature and by circumstance of the things that we do. So if America doesn’t want to consume the art of people who are liberal-minded, there’s not gonna be a lot of art for them to consume.

One thing we do know: music in the United States has led directly to environmental action, the equality of our citizens, a movement against war and violence, and it has raised the voices of the working American. We now need to point it toward direct political action.

Music is a powerful form of non-violent protest. The song “We Shall Overcome” stands out as one of the most enduring symbols of the Civil Rights Era. Even before the 1960s, music played a role in other social movements. One hundred years earlier, slaves in the southern states communicated in code through songs such as “Follow the Drinking Gourd.” Songs of the Great Depression helped bring attention to the plight of poor Americans in songs like “Brother, Can You Spare A Dime?” Decades later, blues music would illuminate the injustices of Jim Crow laws in the South. In other parts of the world, songwriters highlight causes and soften our hearts.

Protest music has been used to help people “form effective political communities.”  The anti-Vietnam War protesters were galvanized and reinforced by the folk music revival of the 1960s. A recent study showed that musicians who engage in politics have followers who are more involved than the average citizen. Today, blogs and other social media make it simple for musicians to interweave their politics and songwriting while speaking to a large audience. 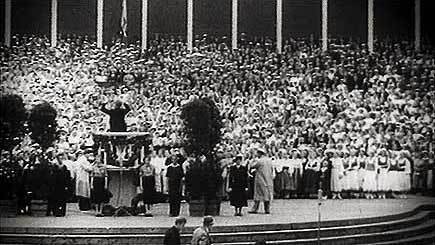 The Singing Revolution in Estonia

In 1987, Estonia was still part of the USSR, desperately trying to free itself from Communism. The Estonian Singing Revolution was a non-violent movement that brought thousands of people together in common cause. They sang together and held hands. An Estonian described the beginning of the Singing Revolution this way

People packed stadiums in huge singing festivals where they sang the folk songs banned by the Communists. In 1991, Estonians achieved their independence from the USSR. For the Estonians, it was a bloodless revolution.

One of the most moving images from the Women’s March on Washington was this video of women singing “I Can’t Keep Quiet” with the artist MILCK.

I watched this video with tears streaming down my cheeks. I recognize the power in the music. It is creative, positive, uplifting. Later, on a Facebook group, I saw that someone posted the video and wrote “we should do this.” Others, myself included, chimed in. “Yes!” But where to start? We were an enthusiastic small group with a vision of what we wanted to do but no idea how to get there.

One week later, we had our first rehearsal. That same day, MILCK released new sheet music on her website. About 35 people – men and women, kids and adults – attended the rehearsal. We learned the parts. We sang. And then we made a video. It was so much fun that we scheduled another rehearsal immediately. Our spirits filled, we made promises to keep the music going, to rededicate ourselves to social justice through music. Our next task is to take our musical activism on the road. Look for us at rallies, marches, and maybe you’ll even come upon us doing a flashmob at the mall.

What are your favorite songs for social justice? Where should our little Central Ohio choir perform? Would you like to be involved in the #icantkeepquiet project? Comment below.