In a previous post (Motivation: Parenting and Practicing), I wrote, “If we have to choose between baseball practice and a piano lesson, piano is always going to win.” While it’s true that my husband and I place a high value on the musical education of our children, we do break our own rules every once in awhile.

Here’s the situation: our son (age 10) is playing baseball in the district’s recreation league. Somehow, despite our complete lack of any sports knowledge, he has become an excellent pitcher this year. He team is undefeated in their division and Son is the starting pitcher. We raced back from camp on Friday just in time for him to lead his team to a win in the first game of the playoffs. Then, amazingly, they won the second game and I’m sitting here waiting to find out what time the championship game will be on Thursday. The trouble is, Thursday is his lesson day; there’s a good chance the game and the lesson will be at the same time.

But I’m going to break my own rule. I’m going to see if we can move his lesson to earlier in the day. If not, I suppose we’ll have to skip the lesson this week. Music is a clear priority in our house, but I’m not heartless. This is one time when we have to make an exception to the rule “music over sports.” As a parent I have to constantly re-assess the boundaries I create for my kids. When they don’t make sense, it’s time to change them, or at least in this case, bend them a little bit.

In my own defense, I did write that I would choose a piano lesson over a baseball practice. I didn’t say anything about a once-in-a-lifetime championship game with an undefeated local team full of excited boys. Sometimes my Tiger Mother roar is more of a purr.

Update: The game was moved to 8pm so we were able to keep our regular lesson time AND have a family dinner before the baseball game. There was a moment in the game when Son had thrown four balls and walked a batter. He was starting to get nervous and perhaps a bit rattled. Then I saw him close his eyes and take a deep breath, just like he does before he plays in a recital. Three strike-outs later, the inning was over. I like to believe that his music training is helpful to him in these high-stress situations. The Raptors won the championship and received big red trophies. 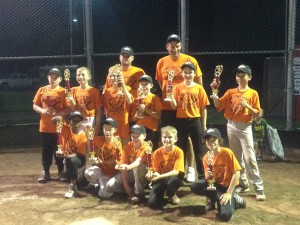