Every lesson I teach is an adventure.

I never know exactly what to expect when a student walks through the door. Flexibility and creativity are my best friends on lesson days.

This week, I had an especially entertaining lesson with Nicolette* (not her real name, of course.) We both enjoyed being silly and stretching our creative muscles. Moreover, Nicolette learned how to play some difficult rhythms. I think she will remember this lesson for years.

As I’ve discussed in other blog posts about practice hacks, the brain loves novelty. According to the article “Learning by Surprise” in Scientific American (http://www.scientificamerican.com/article/learning-by-surprise/),

“Psychologists have known for some time that if we experience a novel situation within a familiar context, we will more easily store this event in memory.”

My band director taught me to count sixteenth notes as 1-e-and-a, 2-e-and-a, etc. Do you remember this from school? Growing up, I struggled to remember the order of the meaningless syllables, but that’s the only way we were taught to count. Much later, in music school at Ohio State, someone suggested using words for rhythm. It was a euphoric moment for me.

Sixteenth notes on the page became words like “Peanut butter” or “Mississippi.”

Entire silly sentences can be made up for hard rhythms. Take this one, for example:

The example above is from music that my adult recorder ensemble is rehearsing. Some of the players were having trouble counting it, but the problem was fixed as soon as I sang “Grasshopper, melted chocolate salamander.” It’s much harder to forget goofy things.

Back to the flute lesson this week with 9 year old Nicolette. Her assignment this week includes playing a variety of sixteenth-note rhythms. She is a Star Wars fan, and we brainstormed new rhythm words. Four sixteenth notes became our favorite little driod R2D2:

The rhythm one eighth note and two sixteenths (counted 1 and-a in band) is now Darth Vader or Skywalker: 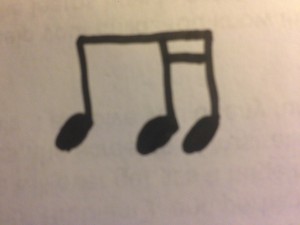 The tricky pattern of two sixteenths followed by an eighth note (counted 1-e-and in band) is now Anakin: 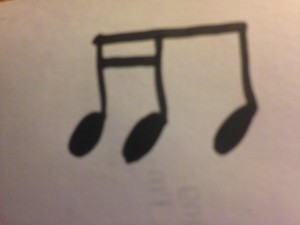 We can’t forget the easier rhythms like two eighth notes. They have two names- Yoda or Ewok- because Nicolette and I couldn’t decide which one was better: 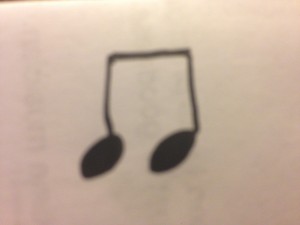 A single quarter note, we decided, would be “Luke.”

And for a grand finale, two sets of triplets would be the worst bad guy of all “Emperor Palpatine.”

Can you imagine R2D2, Yoda, Darth Vader and Anakin marching across your music in time to the beat?

Use these if they make you smile. Or make up your own. Remember, the sillier the better!

Update: 6 weeks later, Nicolette and I are still using Star Wars words for rhythms. I’ve started using them with other students too.