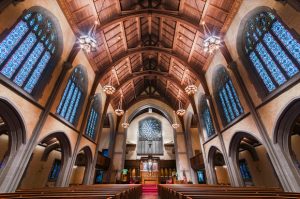 Like many people, I first began to connect music and spiritual practice while a young child. I attended a large, stone Presbyterian church with my mother. The church was well endowed and had a huge organ, robust choir, bell choir, several children’s choirs, and occasionally an orchestra. It was a rich place for music.

My favorite service of the year was Easter. The church was full of people, the altar adorned with lilies, and the choir was resplendent in their robes. At the end of the Easter service, organist Trudy Faber would take the organ to its full volume and open the trumpet stops. I remember the sanctuary filled with sound, feeling the floor vibrate under my new white shoes. Even now, just thinking about it, the hair on the back of my neck stands up. As I listened to the organ in the grand sanctuary while gazing at the stained glass windows and flying buttresses, I felt divine ecstasy. This was an awe-inspiring experience that forever linked music with spirituality.

Music still has that power over me. When I am moved by music, I feel its spiritual force within me and a reconnection with the divine.

I don’t know where I got the idea to play the flute, but my mom remembers me telling her that I wanted to play and insisting on it until she relented. Practicing the flute was a pleasant escape from the intensity of my home. While other teens were talking on the telephone or listening to the radio, I was playing the flute in the safe cocoon of my room. This is where I learned how to be alone to be comfortable with silence, and to direct my own learning. (Just to be clear, I had no guidance on how to practice and consequently had terrible practice habits that wasted a lot of time.)

Practicing also cultivated grit because my commitment to the flute was unwavering. In fact, I never missed a day of practice during the entire four years of high school.

Much later, I would learn to meditate. I have come to understand that my music practice is a meditation, reaching that same place of calm and flow.

Music has also opened me up to a range of emotions. For a melancholy piece, I must channel the composer’s pain and reference difficult moments in my life. On the other hand, jubilant music makes me feel energized. Little by little, music has expanded my emotional intelligence. It helps me to simply sit with people who are sad without trying to “make things better.” I am learning to be present with uncomfortable feelings… without trying to change them. Performing music demands that a musician stay present and fully engaged, no matter the emotional intensity.

Music practice can be a spiritual practice. I learned how to be still, how to listen, how to commit mind and action to a singular goal. Music cracked open my heart to the joy and suffering of life. 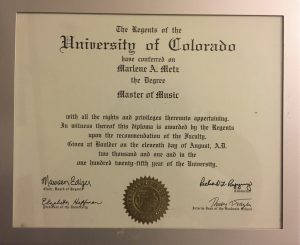 The Apprentice, Dancing with the Stars, American Idol, Top Chef… the judging tables in these shows are less intense than music school. Universities accept only a fraction of students who audition. Fewer make it through the first year. Every week, professors offer criticism in lessons and studio class. Then there are the yearly juries and solo recitals. Music students are required to make fast progress while working through stage fright and self-doubt.

While many teachers tried to be constructive with their criticism, the voices in my head were more destructive. Am I good enough? Do they like me? What if I shake/get sweaty hands/can’t breathe? Facing these fears has been difficult. At times, the negative self talk was deafening, paralyzing. My playing suffered from performance anxiety. So I took classes in Alexander Technique and performance anxiety. I developed a tough skin.  Eventually, I learned that obsessing over these minor details did not serve the music. We do our best and then we move on.

Confronting self-doubt is a kind of spiritual practice because it leads to love and forgiveness.

After graduating with a masters degree in flute performance, getting married, and moving back to Ohio, I worked to build a career in music. Very quickly I learned that there were lots of other people trying to do the same thing and they were just as driven, just as talented (often more talented.) It was thrilling to land a good gig but it also sent me into a spiral of over-work, self-doubt, and anxiety. Teaching, however, has always been something I love. I have a terrific home studio of flute students, teach classes for preschoolers at recreation centers, and work as a music director for a wonderful church, which is aligned with my spiritual beliefs. This wasn’t the career I had envisioned, but I have a passion for it. All of these jobs allow me to help others find joy in music.

Finding my place in the music community has taught me humility and given me a sense of purpose.

Meditation, prayer, ritual, yoga, fasting, and writing are all examples of common spiritual practices. I believe that studying and performing music can also be part of a spiritual practice. For some people, the point of spiritual practice is achieving a closer connection with a higher power. For others, it is liberation from this world. But for me, the goal of any spiritual practice is to grow a soul. Music has been part of my life since the beginning. I am aware of ways that it has shaped me into the person I am today. The lessons I am learning are about