As parents, we want to support our kids. We know that playing a musical instrument is good for them, but the issue of practice can be thorny.

I’ve seen this struggle from the teacher’s perspective when parents ask me how much they should insist on practice. There are power struggles and concerns about the child being “turned off” music forever. Parents are worried that motivation is lacking.

I have had five years to wrestle with it myself as a parent of two young musicians. I don’t know all the answers and I’ve made a lot of mistakes. I know that every family and every child is different, but I’d like to share with you some of the things that have worked for our family. I’d love to hear about the things that work for you.

Practicing is not a choice at our house. That may seem harsh, but chores aren’t a choice either. The children do, however, have a choice about when they would like to practice. Our children are motivated by SCREEN TIME so they are allowed to play on the computer or iPad/iPod when they have finished all chores and all practicing. We keep a fairly consistent routine at home and I think this helps us maintain a regular practice schedule. Music isn’t the only activity the kids are involved in, but it is the highest priority. If we have to choose between baseball practice and a piano lesson, piano is always going to win.

Our ten-year-old son would rather die than miss a day of “Minecraft” so he is eager to finish all jobs as soon as possible. Screen time is his ultimate motivation. We have to keep an eye on him to make sure he doesn’t rush through his practice or forget something, but generally this works well. He is advancing quickly and practices 45-60 minutes every day.

However, our daughter (8 years old) has inherited my dear husband’s proclivity to procrastination. She is easily distracted during her practice. If the cat walks through the room or her brother is making noise, she is likely to get sidetracked. There have been days when we have had to hold a firm line with her about screen time and there have been excuses followed by tears. As long as we continue to gently remind her and redirect her attention when it begins to wander, she will practice 30-40 minutes every day.

In the book How To Talk So Your Kids Will Listen and Listen So Kids Will Talk, Faber and Mazlish encourage parents to be consistent. They argue that consequences should be fair and directly related to the situation. They also encourage parents to let kids make decisions, though the choices should be agreeable to all. Last night, Daughter was complaining heartily about having to finish her practicing. We were in the kitchen, having just finished dinner. I looked around at all of the dinner dishes and mess from cooking and I understood how she felt. I didn’t want to clean up the kitchen either. In fact, there are a lot of things I have to do everyday but I don’t feel like doing. So I gave Daughter an option: she could clean up the whole kitchen (clear the table, do the dishes, wipe the counters, etc.) while I practiced the flute -OR- she could finish her practicing without complaining while I cleaned up the kitchen. After sizing up the mess, Daughter walked upstairs and started practicing right away. It made me think about the research that showed that “grit” is an important indicator of success. (Check out Glenn Kurtz book Practicing: A Musician’s Return To Music for more on that topic.)

I know that motivating my kids is like the Whack-A-Mole game. The things that work right now are different than what has worked in the past, and we’ll have to stay creative in the future.

When the children were younger, we would award stickers in their lesson books for good practice. This worked for awhile, but it required a bit of management from me to have the stickers at hand. I wasn’t consistent enough to make it work long term. However, I was giving Daughter a lesson this afternoon and offered her stickers for perfect scales. It worked! She played three scales perfectly, earning three sparkly stars… and then she put them on her face! Tomorrow this trick isn’t going to work because the novelty will have worn off, but I was grateful for those silly stickers today. We were able to laugh together and she learned the scales. Victory! 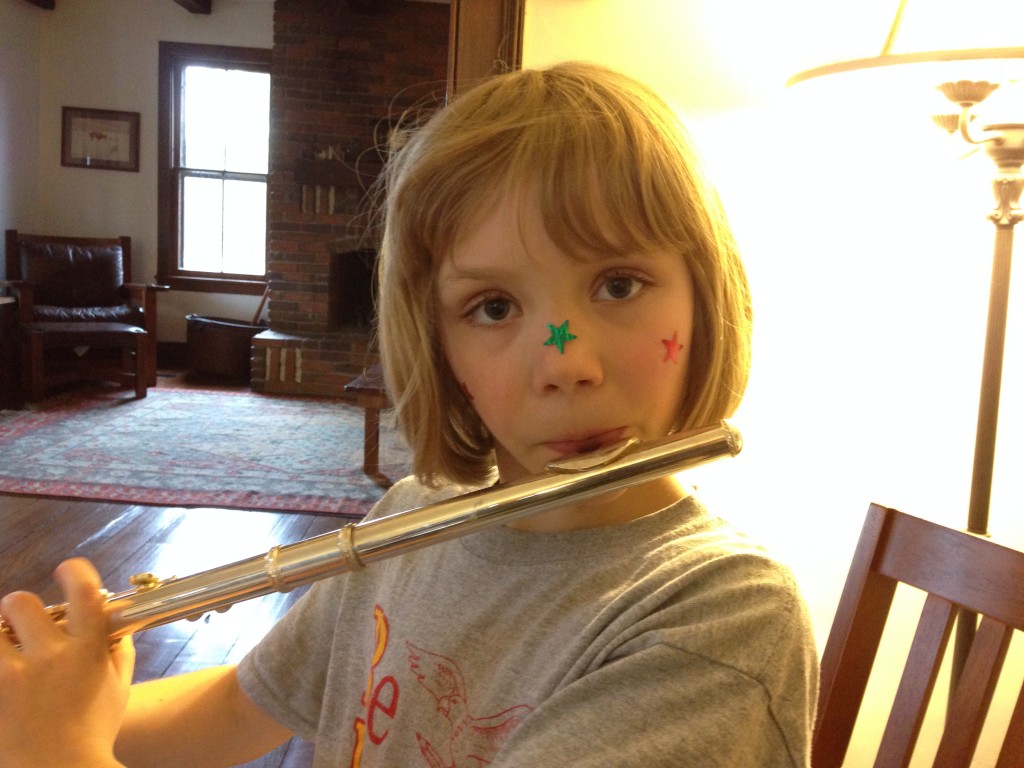 I know other parents who use money as a reward for practice time, similar to allowance, and that works well for them. I have been wary of over-using rewards as motivation ever since I read the book Punished By Rewards by Alfie Kohn. If the rewards are fair and not a burden to the parent, I think they can be used for motivation, but we have to be vigilant about making sure that musicians understand the intrinsic value of practice. 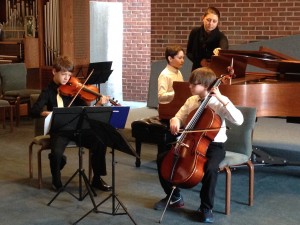 Studio recitals are great, but think about other places your kids can perform too. Could they play for their class at school? Church? A nursing home? Even a concert at home is fun. At Thanksgiving dinner for the past several years, the four of us put on a mini-recital after the big meal. My student Ada* played a concert as her Christmas gift to family, and even printed a concert program. Try asking your child to play their lesson assignment for you. It’s silly, perhaps, but I like to clap at the end of each piece to make it feel like a performance. We once invited my son’s friend over for a “playing play date.” The two musicians played for each other and sight-read duets. Ask your teacher (band or private) about competitions, solo and ensemble contests, talent shows, etc.

Most days my kids are motivated to practice because they want to have their “screen time.” Maybe as they achieve success in music, there will be a positive feedback loop to keep them intrinsically motivated. But until then, it’s my responsibility to make sure they are supported in the ups and downs. “I’m so glad my parents let me quit my instrument,” said NOBODY EVER!